This week I want to share another memo about truth, and specifically, how we should respond to truth. This memo was reconstructed from lecture notes on a class I only remember teaching once about the connection between truth and conscience. But it significantly impacted my thinking. Enjoy! 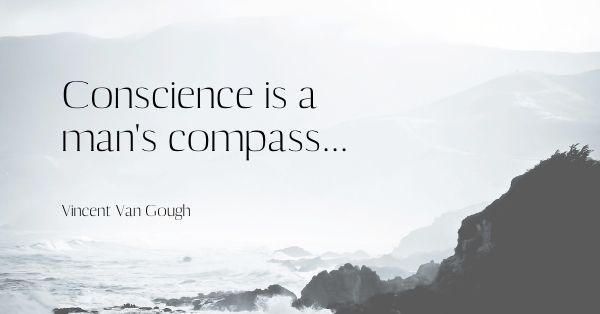 There's a common misconception about how the conscience works going around. I've run into on multiple occasions, and you probably have too. In fact, you may have even seen things from this perspective yourself at times.

I typically see it when giving Bible studies. I'll be teaching some basic principle of Scripture, and lay out the relevant verses in as clear and simple a way as I can. And as I go through the lesson, I ask a series of small decision questions. Does this make sense? Is this clear? Can you see this is what the Bible teaches? All through the study, my partner will be nodding their head in general agreement.

And then come these problem words:

"Yes, I can see this is what the Bible teaches, but the Holy Spirit hasn't convicted me to make that change yet".


The truth of Scripture is clear, but they are waiting for some sort of feeling from the conscience to confirm it is time to act on what the Bible teaches. The misconception is that the conscience sends a signal apart from our ability to discern truth. It's a subtle, but deadly trick of the enemy.


“It's a dangerous misconception to think we need some sort of feeling from the conscience to confirm we should act on what the Bible teaches.”
Click to Tweet

I'm convinced this understanding of the conscience is flawed. And unless the misconception is corrected, it can keep a person from acting on the vital spiritual principles they need to experience real life transformation.

Actually, the word "convict" or "conviction" is not found a single time in the KJV version of the Bible. And the word "convicted" only appears once. In that verse, conviction does seem to be connected with the work of the conscience:

John 8:9
And they which heard it, being convicted by their own conscience, went out one by one, beginning at the eldest, even unto the last: and Jesus was left alone, and the woman standing in the midst.


But the Greek word translated as "convicted" in the verse above is found an additional 15 times in the New Testament. And interestingly enough, in none of those other verses is the conscience ever mentioned.

The Greek word we're talking about is the word elegcho and it means to convince, rebuke or reprove. In Matthew 18:15Moreover if thy brother shall trespass against thee, go and tell him his fault between thee and him alone: if he shall hear thee, thou hast gained thy brother., it is used in the instruction to go and "tell" those who wrong us their fault privately. It's used in Luke 3:19But Herod the tetrarch, being reproved by him for Herodias his brother Philip's wife, and for all the evils which Herod had done, to describe how John the Baptist "reproved" Herod for evils he had done. Paul told Timothy he needed to "rebuke" openly those that sin against leaders in the church (I Timothy 5:19-2019 Against an elder receive not an accusation, but before two or three witnesses. 20 Them that sin rebuke before all, that others also may fear.). And leaders themselves are encouraged to use the Word to "convince" those who reject sound doctrine (Titus 1:9Holding fast the faithful word as he hath been taught, that he may be able by sound doctrine both to exhort and to convince the gainsayers.).

In every case, the word elegcho describes some process by which God sends a message to an individual. That message, whether received or not, is itself the "reproof" God sends.

In most of these verses, God uses some individual to deliver the message. But in a couple instances, like James 2:9But if ye have respect to persons, ye commit sin, and are convinced of the law as transgressors., God uses His Word directly (or in this case, His Law) to "convince" us of sin. That appears to be what is being described in John 8:9And they which heard it, being convicted by their own conscience, went out one by one, beginning at the eldest, even unto the last: and Jesus was left alone, and the woman standing in the midst., the verse mentioned above. It was the words Jesus traced in the sand that "convicted" (reproved, convinced) the woman's accusers of sin. The feelings they felt when reading those words is irrelevant: the conviction got through.


“Conviction is not a feeling that confirms we should act on truth. Rather it is the message of truth God sends to us, regardless of whether or not we feel impressed to act on it.”
Click to Tweet

In other words, conviction is not a feeling that confirms we should act on truth. Rather it is the message of truth God sends to us, regardless of whether or not we feel impressed to act on it. If we see truth, we're accountable, from that instant on.

What role then does conscience play?

The Role of Conscience

The Bible describes the conscience as a spiritual faculty resulting from traces of the Law of God imprinted in the heart of every person, by virtue of creation, whether we are a believer or not (See Romans 2:14-1514 For when the Gentiles, which have not the law, do by nature the things contained in the law, these, having not the law, are a law unto themselves: 15 Which shew the work of the law written in their hearts, their conscience also bearing witness, and their thoughts the mean while accusing or else excusing one another;)). This imprint of God's Law simply "bears witness" to whether or not something is true.


“The conscience as a spiritual faculty resulting from traces of the Law of God imprinted in the heart of every person, by virtue of creation that simply bears witness to whether or not something is true.”
Click to Tweet

Paul wrote that the Holy Spirit used his conscience to "bear witness" his burden for Israel was genuine (Romans 9:1-21 I say the truth in Christ, I lie not, my conscience also bearing me witness in the Holy Ghost, 2 That I have great heaviness and continual sorrow in my heart.). And in another place he wrote that the "testimony of his conscience" confirmed the simplicity and sincerity of his ministry (II Corinthians 1:12For our rejoicing is this, the testimony of our conscience, that in simplicity and godly sincerity, not with fleshly wisdom, but by the grace of God, we have had our conversation in the world, and more abundantly to you-ward.).

In other words, when you see something is true in the Bible, the fact you see it, is itself evidence the conscience is working. The conscience doesn't need to send some separate signal or feeling to confirm reason. As soon as you discern a message is true, conscience has already validated it.

The Heart of the Problem

The real problem is not God's ability to get a message through to us. "Reproofs of instruction are the way of life" (Proverbs 6:23For the commandment is a lamp; and the law is light; and reproofs of instruction are the way of life:). And in my experience, if a person will consider the Word with "an honest and good heart" (Luke 8:15But that on the good ground are they, which in an honest and good heart, having heard the word, keep it, and bring forth fruit with patience.), it's not that hard to discern if something is true. The core problem is more our unwillingness to act on the messages God sends.


“The real problem is not God's ability to get a message through to us, or our ability to discern if something is true. The core problem is our unwillingness to act on the messages God sends.”
Click to Tweet

When God sends a reproof we know is true, through whatever channel, the question should not be, am I convicted about this? Or how does this make me feel? Or do I have an impression to act on it? The fact we have discerned the message is true means God has sent it, and it has been properly validated by our conscience.

Rather, our questions should be, is this information accurate, correct, right? Is this really what the Bible teaches? As soon as we discern a message is true, we've been convicted.

And if so, our real focus should be on our response. The response of a healthy, mature believer is to automatically ask: Lord, what would you have me to do? We need to be decisive and determined about acting on God's Word. We must cultivate a character that responds instantly--concerned only that our actions are faithful to God's Word. Or to quote Paul, once more:

Acts 24:16
And herein do I exercise myself, to have always a conscience void to offence toward God, and toward men.

Don't fall for the misconception truth is discerned primarily by the intellect, reason, or any other human faculty, and that it needs to be confirmed by some separate "feeling" sent off by the conscience. The message itself, is the reproof, and our ability to know it is true, is the conscience.

Rather, focus your efforts on personal implementation of whatever message God sends. Failing to do so loads our conscience with a burden of guilt and hinders its future usefulness. Whereas consistently responding to truth keeps the conscience clear, sensitive, and effectual.

It's not about feelings, but simple personal integrity.

Have you encountered this particular misconception? Or perhaps been influenced by it yourself? How important is it to understand how the conscience works? To always act on truth God sends to us? Share a comment below...