This week's memo is the last one in our series on the core principles driving our ministry at FAST. And it's one of my favorites in our entire library. Let's always look for ways to build this concept into everything we do for Christ! 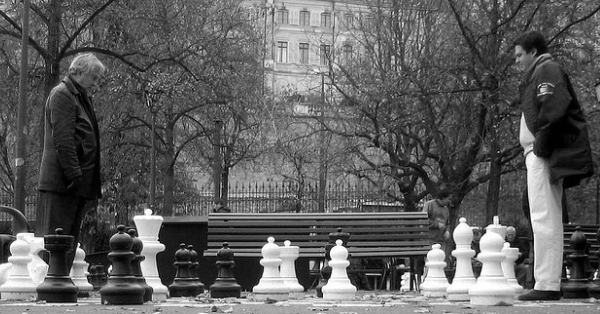 For nearly 30 years, virtually my entire adult life, I've pursued a single vision with single-minded focus: to jumpstart a process that leads to spiritual multiplication. Looking back, I'm sometimes surprised at how little I've wavered from that vision. It's still the driving force behind everything I do.

And I remember how it all started.

I was a brand new Christian, in my early twenties. And as I've mentioned elsewhere, some friends had taken me under their wing and were investing time in my training. At one point I was assigned to memorize an illustration similar to the FAST Track illustration in our Explosion Formula booklet.

As I memorized the various parts of the presentation, something clicked in my brain, and I realized clearly it had to be God's plan. Conviction came with overwhelming force that this was the only conceivable way to reach a world. And at that instant, the whole direction of my life changed forever.

I was good with numbers, and I knew the difference between an arithmetic series and an exponential sequence. The first plods along at a steady, consistent pace. The other starts slow, but accelerates, and quickly becomes explosive.

The difference between winning 100 members to Christ each year (Plan A) and winning just 1 person a year, but also training him to reproduce (Plan B) is pretty shocking. You can see the preliminary results of these two plans in the table below:


The results seem comparable for the first 10 years. But Plan A merely produces 1000 converts. Spiritual babes, unlikely to ever reproduce. And Plan B produces 1000+ reproducing workers, all hand trained, one at a time. But the results diverge more dramatically over the next 10 years:


During these next ten years, Plan A merely produces another 1000 converts. But Plan B explodes, because those first 1000 workers have now all multiplied and become another 1000 each! All still one person at a time. It reminds me of the promise in Isaiah:

Isaiah 60:22
A little one shall become a thousand, and a small one a strong nation: I the LORD will hasten it in his time.

I believe multiplication is God's plan for every believer. The "each one reach one principle" is imminently doable. And God's promises are certainly ours for the taking!

I'll spare you the numbers were this to continue another 10 years, but here's the nutshell version: Plan A continues to produce consistent results, netting another 1000 baptisms or so. But Plan B is now producing 1000's of baptisms every day. New members, all equipped in time to reach out and win still more.

By the end of this third decade, Plan A is sitting at around 3000 believers. But Plan B is within spitting distance of reaching the entire world, with over a billion skilled, trained workers. It's the fulfillment of God's promise in Jeremiah:

Jeremiah 33:22
As the host of heaven cannot be numbered, neither the sand of the sea measured: so will I multiply the seed of David my servant, and the Levites that minister unto me.

Given the extraordinary contrast in the results, how could any one, serious about finishing the work, conscientiously give their life to anything but spiritual multiplication?

The Game of Chess

In those early days, a couple illustrations drove the point home to my thinking. One was an old legend about the inventor of Chess. Story has it, the Emporer of India was so impressed with the game, he asked the inventor to name a reward. The man asked for just one grain of rice for the first square. Two for the second. Four for the third. And double that amount for each of the remaining squares.

To the Emporer, and most of us who aren't mathematically inclined, it seemed a small reward. And he quickly agreed. But when calculated, the final total was well over a trillion tons of grain. That's somewhere in the ball park of the entire world's global rice production for the next 500 years.

If we are serious about reaching the world, we need to cultivate the kind of strategic thinking manifest by the inventor of Chess. Multiplication is by far the most potent way to finish the work of the Gospel.

The massive explosion of a nuclear bomb is actually another illustration of multiplication. A single neutrino injected into fissile material causes an atom to split, ejecting two neutrinos and releasing a small amount of energy. Those two neutrinos split two more atoms, firing off four neutrinos, and releasing double the energy. With each iteration, the number of neutrinos doubles and the chain reaction accelerates--resulting in an explosion of unfathomable power. It's pure multiplication.

But multiplication can be hindered. Nuclear plants (like the one in Fukushima) attempt to control the rate of reaction by inserting lead rods into the fuel source. These rods absorb a portion of those flying neutrinos, slowing the process, and reducing the power output to a more manageable level. Done properly, it prevents an explosion.

Unfortunately for us, the enemy has succeeded in inserting lead rods into the disciple-making process of most churches. Whether it is due to poor internalization of the word, lack of prayer, sin in the life, ineffective ministry training, or any number of other causes, explosive multiplication is being blocked.

And it's a cause for concern. When we think in terms of multiplication, every broken link in the reaction process has severe consequences. One new member who leaves the church, is not just a single person, but a loss of the 1000 believers he might have become ten years down the road if properly nurtured and trained. A person who survives church membership, but never learns to reproduce, is not much better. In the grand scheme of things, a loss of 999 potential members is only marginally better than the loss of 1000 potential members.

If we can figure out how to remove all these "lead rods", however, it would only take a single "neutrino" to start the world's final, spiritual chain reaction! Exciting thought, isn't it?

The flip side of all this should be obvious. If our goal is to equip every believer to become a reproducing worker, we ourselves must learn to reproduce. The multiplication process only works so far as there are no broken links in the chain, no break in any of the generations. And each failure to reproduce is not the loss of just one individual, but the thousands who could have been discipled through his influence and the influence of those he trained. Clearly, none of us can escape the priority of becoming a worker for Christ ourself!

One of the best ways to get equipped for soul-winning service is to learn the basics of how to share the basic teachings of the Bible with others. And FAST can help with that. Enrollment is now open in an exciting new, groundbreaking course called Truth Corps. In it, we'll share a powerful strategy for learning how to answer people's questions on some of the most important Bible questions today. You'll also learn how to find and give Bible studies, how to answer difficult problem texts, and much more. Get verse by verse answers for dozens of questions, and a step by step guide for continuing the expansion of your Bible knowledge. This class will change your life!

Give multiplication the personal priority it deserves. Give one summer to becoming a more effective Bible worker. Come join the Truth Corps!