Tomorrow marks the 500 year anniversary of one of the most important events in the history of the church. On October 31, 1517, a lowly monk named Martin Luther went to Wittenberg Chapel and nailed his 95 theses to its doors. That's 500 years ago, tomorrow. Amazing! 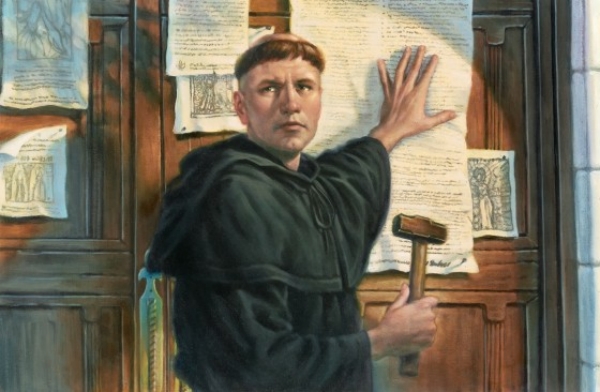 Actually, Martin Luther wasn't the first to object to some of the more unbiblical practices of the Roman Catholic church. Wycliff and Huss had made similar objections before. And centuries earlier, the Waldenses had been busy encouraging Christians to study deeper. But the timing of Martin Luther's act, gave it an impact unlike any of the reformers before. In fact, the result was so dramatic, many consider this the birth of the Protestant Reformation.

Many factors aligned to magnify the impact of Luther's actions. Germany was fragmented politically, making it impossible for a central government to exercise control over renegade states allied with Luther. The printing press had recently been invented, enabling Luther's writings to spread throughout Europe. The renaissance had been in full bloom for some time, giving European scholars access to thousands of ancient church manuscripts. And the seeds of the Enlightenment were already sprouting, causing thinking people everywhere to question the orthodoxy of the medieval world. All of these things combined to create the perfect storm.

Protestantism erupted all over Europe, leaving the church fractured and divided into numerous small groups. And then those groups continued to fragment and divide until today there are more than 30,000 protestant denominations, each with its own set of theological beliefs!

Despite the differences between these groups, a couple of things hold them together. These are the true core of Protestantism, the heart of the reformation. And they include:

Martin Luther and the other reformers argued that everything the church teaches should be tested by Scripture. And where it conflicts with Scripture, the church must submit. God's Word is supreme.

In contrast, the Roman Catholic system taught that while Scripture was important, tradition had an important place too. And in fact, where Scripture conflicts with the traditional views of the church, Scripture must submit. Tradition is thus more important than the written Word.

A second pillar of the reformation was the belief that salvation came through faith alone. Forgiveness could not be bought or sold, and the various sacraments of the church conveyed no merit to the sinner. No, salvation was full and free, through faith. It must be a faith that produces obedience, and leads to good works, but that changed life does not in any way contribute to the salvation Christ offers. It is the effect, not the cause.

Again, the Roman Catholic system stood opposed to this principle. Merit could be obtained through any form of penance specified by the church. The various sacraments it administered contributed to redemption. Salvation was not through faith alone, but of necessity, came through faith plus works combined.

There was a third core belief that united the Protestant Reformation. It was the conviction that the Roman Catholic church was in fact the Antichrist power prophesied in the book of Revelation. While the reformers disagreed on many points--they were essentially unanimous on this point. And they proclaimed it with great clarity, and to great effect.

This realization gave the reformers the courage to break with Rome, and stand for their beliefs--even at grave risk to their lives. It gave an urgency, a compulsion, a power to their message. And as a result, countless thousands responded to the call.

The Roman Catholic church, of course, vehemently rejected this view and set its greatest scholars to work developing alternate systems of prophetic interpretation to divert the prophetic spotlight from itself. And those teachings have had significant success permeating the various branches of Protestantism today.

Actually, these three pillars of Protestantism worked together. If the Bible is your ultimate authority, then it is logical you should study it. If you study it, you will clear see that it teaches that salvation comes through faith alone. From there, it is only a small step to the conclusion that any church with teachings contrary to this is, in fact, Antichrist, and to be resisted.

The Future of Protestantism

Some have been agitating the idea that the reformation is over. This is largely because scholars here and there, prepping for this moment, began working on a process of reconciliation between the Roman Catholic and various Protestant churches many years ago. These religious leaders hoped to try to find wording that would resolve these differences going all the way back to Luther through a process of dialog. The goal was to encourage mutual respect, tolerance, and understanding. And it was hoped that some kind of declaration could be signed on both sides signaling the end of this 500 year schism.

And there has been some success. The Roman Catholic church has repositioned itself to appear more tolerant and accepting of their Protestant brethren. And some of the more mainline churches have repositioned themselves to be more tolerant and accepting of their Catholic counterparts. And no doubt, there will be big signing ceremonies in various places emphasizing the intended mutual respect, tolerance, and understanding.

But don't let anyone tell you Protestantism is dead. While some Protestant leaders may have compromised their values in their pursuit of unity, semantic word play can not erase the underlying differences. And thousands of denominations still cling to their core principles of Protestantism. They believe Scripture must have the pre-eminence. And they believe salvation is by faith alone. And no document signed by individuals here and there will make those differences go away!

But the fact is, as long as most churches continue to believe in the authority of Scripture and salvation by faith alone, the Reformation will live on. However hard theologians try to wrangle out consensus by playing around with words, the core issues of the Reformation remain!

As we pass through this intensely important historic milestone tomorrow, let us remember what lies at the heart of true Protestantism and reaffirm its core principles in memory of Martin Luther and all the others who sacrificed so much to make the Reformation possible.

How important are the core principles of the Protestant Reformation today? How vital is it to maintain the three-fold cord? What can we do to promote these core principles still today? Leave a comment below...