Though I normally share this around the Holiday Season each year, it seemed appropriate to pull it out given our emphasis on Bible prophecy this month. If you haven't read this before, or just want a refresher, it's a fascinating study... 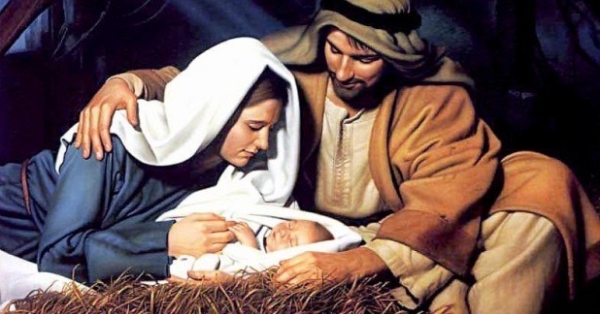 Many people pause this time of year to reflect on the birth of Jesus. No one knows the exact day Jesus was born, but as believers, we can take advantage of the interest people have in His first coming, to point minds to his second coming and other eternal realities. One such reality is God's amazing power to predict the future. And the birth of Jesus reveals that power in a special way.

Take the two genealogies of Jesus recorded in the Bible. One is found in Matthew 1 (verses 1-16), and the other is in Luke 3 (verses 23-38). If you are like most people, its easy to just gloss over these verses and get to something more interesting like the Wisemen, the Shepherds, or Simeon and Anna. But to do so would be a mistake, for these passages are quite significant.

The first thing worth noting is that these genealogies clearly contradict each other. Read the names carefully, and you will see they diverge after David. Matthew's account takes Jesus through the line of Solomon (vs 6). While Luke's takes us through another son of David, named Nathan (vs 31). How can Jesus have two genealogies?

The answer is simple. Matthew is clearly recounting the genealogy of Jesus through Joseph. Verses 16 says "And Jacob begat Joseph the husband of Mary, of who was born Jesus, who is called the Christ." The verb "begat" implies a direct biological descendant. This is Joseph's line.

Luke's version uses a much more generic expression, describing Jesus merely as "the son of Joseph, which was the son of Heli". This looser expression seems to allow for sonship by both marriage or adoption. See I Samuel 24:16And it came to pass, when David had made an end of speaking these words unto Saul, that Saul said, Is this thy voice, my son David? And Saul lifted up his voice, and wept. for an example of the former. Jesus himself, is an obvious example of the latter. In other words, if Joseph was the biological descendant of Jacob, then Heli must have been his father-in-law. Mary's father. In other words, Luke is giving us the biological line of Jesus.

Why both records? It is not surprising, given Matthew's special interest in the Jewishness of the Messiah, that he focuses in on the legal lineage of Jesus. Nor is it surprising, given that Luke was a gentile medical doctor, that he chose to focus in on his human, biological side. But the two genealogies combined are the key to unlocking a twisted knot of prophecies a casual Bible reader might never even notice.


“Comparing the genealogies in Matthew and Luke are key to unlocking a twisted knot of prophecies a casual Bible reader might never even notice.”
Click to Tweet

Consider for example the following promises:

1) The Messiah was to inherit the throne of David. (Isaiah 9:7Of the increase of his government and peace there shall be no end, upon the throne of David, and upon his kingdom, to order it, and to establish it with judgment and with justice from henceforth even for ever. The zeal of the LORD of hosts will perform this.).

2) The Messiah would be a direct biological descendant of David. (Psalms 132:11The LORD hath sworn in truth unto David; he will not turn from it; Of the fruit of thy body will I set upon thy throne.).

In Jewish tradition, the throne was only transmitted through the male line, which means the heir of David's throne must also be his biological seed.

But the problem is complicated by the prophecy saying Jesus would be born of a virgin (Isaiah 7:14Therefore the Lord himself shall give you a sign; Behold, a virgin shall conceive, and bear a son, and shall call his name Immanuel.). If there is no human father, how could the Messiah fulfil both conditions?

To make matters worse, the legal right to the throne was required to come through Solomon (I Chronicles 28:5And of all my sons, (for the LORD hath given me many sons,) he hath chosen Solomon my son to sit upon the throne of the kingdom of the LORD over Israel.). And as that inheritance wound it's way through the long chain of David's heirs, it eventually came to Jeconiah, a particularly evil king--whom God cursed saying:

Jeremiah 22:30
Thus saith the LORD, Write ye this man childless, a man that shall not prosper in his days: for no man of his seed shall prosper, sitting upon the throne of David, and ruling any more in Judah.

Now if the line is to come through Jeconiah, and yet the curse in Jeremiah blocks all of his male descendants--how could the Messiah fulfill all the required conditions?

The answer is obvious with just a little reflection. Jesus inherited the right to the throne when Joseph married Mary and became the "father" of her child. A careful reading of Matthew's genealogy shows it is the appropriate royal line--down through Solomon (vs 6), and even Jeconiah (vs 11). But because Jesus was not biologically related to Joseph, he was able to bypass the curse pronounced on Jeconiah, and all his descendents--including Joseph!

Luke's genealogy makes it clear Jesus was also a biological descendant of David, but through Nathan instead of Solomon, and on down to Mary, his sole biological parent. He was thus also, clearly, "the fruit" of David's body.

In other words, for Jesus to be both the heir of David and the seed of David, he had to be born of two parents exactly like Joseph and Mary. It was only through the combination of those exact genealogies that He could fulfill the prophecies related to His birth. And God predicted it all centuries in advance!

As you contemplate the birth of Jesus with friends and family, why not tell the story of the only two parents in the world who could fulfill the complicated knot of prophecies required in the birth of Jesus. And then point them to the incredible God Who alone could orchestrate such a remarkable fulfillment.


“There is a God in control Who knows the end from the beginning. And Who is there to help us every step of our life as well.”
Click to Tweet

Let's encourage ourselves and those we love, that there is a God in control Who knows the end from the beginning. And Who is there to help us every step of our life as well.

What do you think? What is your favorite prophecy of the Messiah? How does the evidence of Bible prophecy strengthen your faith?