This month we'll be focusing in on what's really most important, here at FAST. Kind of a refresher and refocus month. In light of that, I decided to repost one of my all-time favorite Monday Memos. It is a great reminder of why we must live our lives as an agent for God... 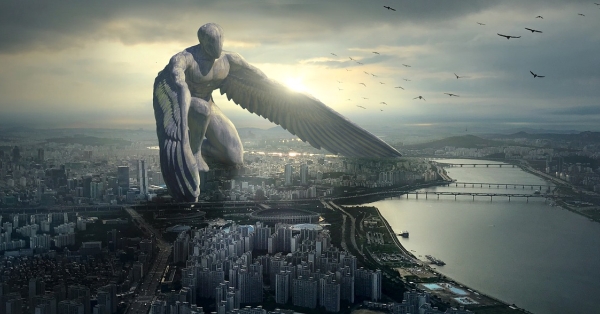 Over the last few weeks I have been re-studying the Gospel of John--and I've noticed a theme. The Bible makes it clear, no one can really speak of heavenly things unless they have seen heaven. John mentioned it in his prologue (John 1:18No man hath seen God at any time, the only begotten Son, which is in the bosom of the Father, he hath declared him.). It is in the conversation Jesus had with Nicodemus (John 3:11-1311 Verily, verily, I say unto thee, We speak that we do know, and testify that we have seen; and ye receive not our witness. 12 If I have told you earthly things, and ye believe not, how shall ye believe, if I tell you of heavenly things? 13 And no man hath ascended up to heaven, but he that came down from heaven, even the Son of man which is in heaven.). And it is in his message to the crowds that followed Him (John 6:44,46No man can come to me, except the Father which hath sent me draw him: and I will raise him up at the last day. . . . Not that any man hath seen the Father, save he which is of God, he hath seen the Father.). You'll find it elsewhere as well.

In my personal contemplation of the grand mysteries of Scripture, three truths about heaven have proved especially inspiring. I try to incorporate a few moments reflecting on these each day into my morning devotions. It's my prayer you will find these just as motivating for you as they are for me:

These worlds were all created by Jesus, of course (Hebrews 1:2Hath in these last days spoken unto us by his Son, whom he hath appointed heir of all things, by whom also he made the worlds;), but earlier in time, and they never fell. The beings on these world are all pure, and holy, worshiping God to this day (Revelation 5:13And every creature which is in heaven, and on the earth, and under the earth, and such as are in the sea, and all that are in them, heard I saying, Blessing, and honour, and glory, and power, be unto him that sitteth upon the throne, and unto the Lamb for ever and ever.). Our poor world is the one lost sheep. These unfallen worlds are the remaining 99 who stayed loyal to God (Luke 15:4What man of you, having an hundred sheep, if he lose one of them, doth not leave the ninety and nine in the wilderness, and go after that which is lost, until he find it?). While we cannot see them, they are watching earth with intense interest. "We are made a spectacle unto the world [Gr: kosmos], and to angels, and to men" (I Corinthians 4:9For I think that God hath set forth us the apostles last, as it were appointed to death: for we are made a spectacle unto the world, and to angels, and to men.).

Recognizing we live in a universe of intelligent, thinking creatures, observing all we say and do in an effort to understand the mysteries of iniquity and of godliness, inspires me to live a life that reveals God's redeeming glory, "unto the principalities and powers in heavenly places" (Ephesians 3:10,21To the intent that now unto the principalities and powers in heavenly places might be known by the church the manifold wisdom of God, . . . Unto him be glory in the church by Christ Jesus throughout all ages, world without end. Amen.).

One reason sin will never arise again, will be the testimony of the redeemed. Our experience will be such that no intelligent being would ever want to experiment with sin again. We will be antibodies to the universe that serve to prevent a second infection with the virus of sin.

I can't wait, by the grace of God, to be able one day to travel to these unfallen worlds and tell my story, as an official representative of heaven's central government. Not only are we "ambassadors for Christ" here and now, I believe we will have the privilege to serve as ambassadors there and then. In all places, and through eternal ages.

3) Agents of Heaven Now
Our life in this world is in many ways a preparation for the world to come. Our experience here is but a training ground for a larger and more important work there. It's the undergraduate program preceding our graduate school. Or more accurately, our kindergarten to multiple post doctoral projects. We have an exciting future ahead!

But that does not mean our time here is not important. It is. Every small step, growing in discipline, commitment, and perseverance contributes to a character that fits us for our future work. We are officers in an alliance of unfallen worlds right now. And if faithful, in time, we will be promoted to the position of ambassador to the universe.

Furthermore, our efforts in this training school count! Not only is the battle around us real, but the destinies of friends and family often hang in the balance. Our personal example, combined with personal effort, may just make an eternal difference.

As agents of heaven now, we can check in daily with headquarters through prayer and the study of Scripture. And if Spirit-led, we'll be sure to get daily communication back: instruction and training, assignments and objectives. And we can spend our lives in the thrill of fulfilling those missions. Each day we can go on God's errands, happy to be a member of the winning team.

As you reflect on your life, refuse to be caught up in the day to day details that that bog us down. We were not created for a mundane, pointless existence. No, we were called to a life of adventure. A life of mission and purpose. We are heroes on a daring and difficult journey. A journey in discipleshp. We're chasing after a glorious destiny.


“We were not created for a mundane, pointless existence. No, we were called to a life of adventure.”
Click to Tweet

Reflect on these powerful truths now and then. Allow them to seep into your identity, to shape your reality, to transform your life. We are called to be valiant champions (Psalms 60:12Through God we shall do valiantly: for he it is that shall tread down our enemies.). Mighty men and women, that "know their God", who are "strong, and do exploits," teaching many (Daniel 11:32-3332 And such as do wickedly against the covenant shall he corrupt by flatteries: but the people that do know their God shall be strong, and do exploits. 33 And they that understand among the people shall instruct many: yet they shall fall by the sword, and by flame, by captivity, and by spoil, many days.). Through Christ, we can be, and must be, "more than conquerors" (Romans 8:37Nay, in all these things we are more than conquerors through him that loved us.).

May these truths inspire you to climb higher in your walk with God!

Do the grand mysteries of the Bible motivate and inspire you? What do you do to weave these themes into your daily life? What role does heaven play in your life here and now? Share a comment below.