This week, I had planned to write about all the new features in our toolbox, but some of the changes are taking a bit longer than anticipated. So I decided to take a moment to reflect instead on the life of a well-known evangelist who died last week. You'll have to wait a bit for news about our updates! 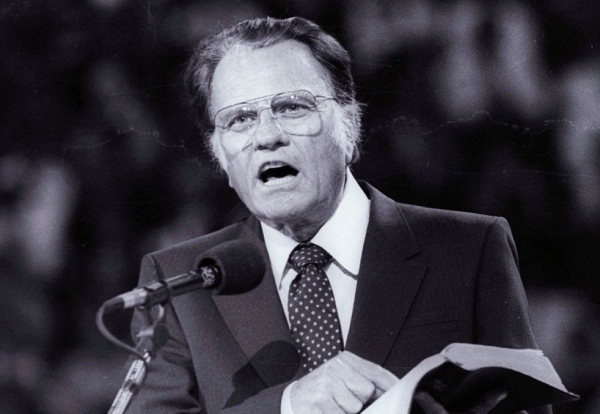 On Wednesday, one of the world's great evangelists passed to his rest, at the age of 99. Billy Graham is estimated to have preached to 215 million people in 185 countries in a career spanning nearly 70 years. He stands in the ranks of Charles Finney, Billy Sunday, Charles Spurgeon, and Dwight Moody--perhaps the last of that rare breed of evangelist who commanded a world stage. He is reported to have met with every US president from Truman to Obama, and was listed on Gallup’s annual U.S. poll of most admired people 61 times, almost twice as often as the next most popular world figure. While I may differ on some theological points, it is easy to see he lived a long life of impressive service.

While living in Chicago, I had the privilege to visit the Billy Graham museum on two occasions and the story of his rise to fame and influence always intrigued me. What gave his preaching such power, and appeal?

I've watched a sermon or two over the years. His voice was always clear, and marked by a distinctive accent. But there was nothing exceptional about his oratory. In fact, his messages were generally quite simple. What made him stand out? It dawned on me at last--his simplicity WAS the secret to his influence. And perhaps the most impressive thing about his life, was his determination to preserve that simplicity through his entire ministry.

In an article posted in the The Observer, John Bonazzo described a TED talk, Graham gave late in life, to a room full of tech movers and shakers. He summarized the main points Graham made, and described it as typical of his presentations. He suggested it shed light on his thinking, his approach, his focus.

You can watch that particular talk below. It's worth the 20 minutes it takes to listen in.

I've outlined the process Graham followed in this talk below:

1) He began by connecting with his audience. In a humble way, and with a bit of self-deprecating humor, he expressed his admiration for the tech leaders he spoke to, for the great changes they were attempting to bring to the world.

3) Next he transitioned once again, by pointing out there were some problems technology could not solve: The mystery of human evil. The reality of personal suffering. And ultimately, the inevitability of death. It was a profound, but unarguable description of the human condition.

4) Last, he argued the only solution to these problems is to accept some things on faith, citing his own experience with Jesus Christ. He gave a succinct but pointed testimony of his own personal conversion. And ended with an appeal for his listeners to do the same.

It was a simple outline, and indeed typical of the few messages I had heard Graham give. Connect to the person you speak to. Shift the conversation toward the Bible. Outline the human condition, and our need of God. Then point to Jesus Christ as the only hope, through your own personal testimony. It brought the words of the apostle Paul to mind:

I Corinthians 2:1-2
1 And I, brethren, when I came to you, came not with excellency of speech or of wisdom, declaring unto you the testimony of God. 2 For I determined not to know any thing among you, save Jesus Christ, and him crucified.


I wonder sometimes if we don't over-complicate the gospel. Perhaps, the simpler we make it, the more universal and transcendent it becomes. Billy Graham seemed to grasp this intuitively, and had the integrity to preserve its simplicity through his long life. And in the end, his life stood as a testament to the gospel's appeal and power.

How important do you think it is to keep our message simple? To keep the Gospel centered on the human condition, and the solution only Christ can bring? Share a thought in the comments below...